Lippincott, Inc. was founded by Donald Lippincott in 1966. The key concept and sole focus of the firm was to create an artist-friendly environment where sculptors could have their large-scale works fabricated in a manner that was sensitive to their specific needs and methods while bringing to bear the full range of professional manufacturing c apability required. It was the first, and for more than a decade, the only company to be performing this role exclusively. For the first 4 years Lippincott worked out of a simple 8,000 square foot wood-framed hangar in North Haven, CT. Then in 1970 a new building was erected on the same site, increasing the interior workspace to 22,000 square feet. With 25-foot ceilings, overhead cranes, state of the art lighting and giant bay doors, this was indeed the ideal manufacturing space: an artist’s studio writ large.

Prior to the inception of Lippincott, Inc., if artists wanted to create works larger than their studios or metalworking capabilities allowed, they had to work with industrial fabricators. The problem inherent in going that route is that production-oriented shops are typically set up to manufacture a specific product in an established fashion, not to work with artists in accordance with what is often a complex, typically non-linear, process of creating art. Concerns about slowing production, unknown costs, and issues relating to the engineering of artistic designs also discouraged many industrial companies from taking on sculptural projects. Lippincott, Inc. was able to address these challenges and put the tools, and importantly the vocabulary, of industrial fabrication at the disposal of artists in a very direct and personal way. 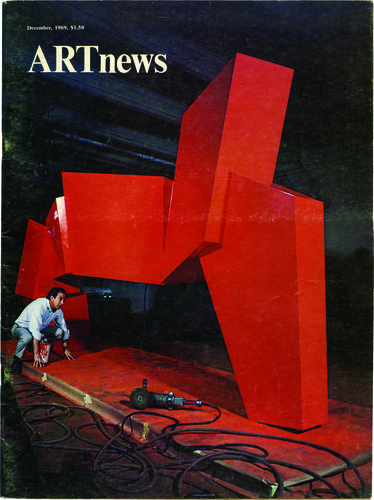 Donald Lippincott recognized that assembling a highly talented crew and providing a receptive, versatile work environment was an essential part of the close collaboration between artist and fabricator that sculpture building requires. In a very real sense, Lippincott, Inc. functioned as an extension of each artist’s workspace. James Rosati said of the company: “I think of it as another studio, but a studio to answer every artist’s dreams.” George Sugarman’s experience was similar: “I have felt for a long time as if it’s really an extension of my studio, as if here is a group of workers who are really my assistants. . . . [W]ith the close personal attention they give to each sculpture I can be sure that my aesthetic goals will be realized.” Louise Nevelson described the environment there as one “of total harmony and understanding.” With multiple projects at various stages of completion, and artists, dealers and educators converging serendipitously, the place at times felt more like a salon than a manufacturing facility.

The willingness to engage with the artists and stay open to experimentation is what made the venture a success. In addition to practical experimentation, Lippincott also experimented with the way it conducted business by collaborating financially with artists at times. Going beyond the usual contract-to-build business model, Lippincott sponsored the cost of materials and labor to create partnership sculptures that were owned in conjunction with the artists, shown at its facility and offered for sale. This practice was a win/win situation; it helped artists get their works built and it helped the company even out its production schedule and participate in a new aspect of the art business. Partnership works were either placed on loan or exhibited on the property. As a result, the fifteen-acre field surrounding the Lippincott factory became an informal sculpture park visited by area residents, student groups, and art professionals from around the world. The importance of showing the work in this fashion should not be overlooked. In the early days of the company, large-scale modern sculpture was not much in evidence. There was little new public art in cities, and most museums and galleries did not have adequate space to show larger sculptures. The pieces on display at Lippincott offered prospective collectors, both private and public, a chance to see works realized at large-scale and to develop a greater understanding of the impact and importance of this work. 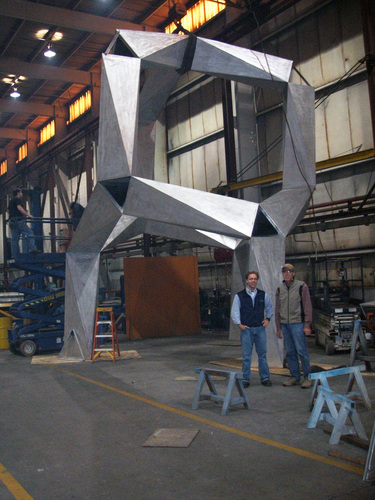 With a crew size of between 12 and 24 workers over the years, Lippincott, Inc. remained a relevant and active sculpture fabricating establishment right up to 1994 when the lease on the building ended. At that point, Donald and his brother Alfred Lippincott, who joined the firm in 1979, decided to re-configure the company as Lippincott’s, LLC and continue the mission of fabricating and conserving sculpture, but in an altogether different way. In late 1994 they closed the factory in North Haven and began collaborating with other companies in the New England area, bringing in Lippincott projects and working closely with key people at these firms to complete them just as they had at their own factory. It worked, and from 1994 to the present, Lippincott’s, LLC has been consistently busy directing and participating in the construction and conservation of large-scale metal sculpture. This team approach had the added benefit of bringing fresh ideas and new methods and capabilities to the table; a serendipitous cross-pollination that has enabled the Lippincott’s to realize some of their most exacting work to date.